Still commonly known by its post-war name of Lomonosov, the estate at Oranienbaum is the oldest of the Imperial Palaces around St. Petersburg, and also the only one not to be captured by Nazi forces during the Great Patriotic War. Founded by Prince Menshikov, Peter the Great's closest adviser, the Grand Palace is one of the most opulent examples of Petrine architecture to have survived to the present, although until very recently the palace itself has been greatly neglected. After Menshikov's death, Oranienbaum passed to the state, and was used as a hospice until, in 1743, it was presented by Empress Elizabeth to her nephew, the future Peter III. Peter made Oranienbaum his official summer residence and transformed one corner of the park, ordering the construction of a "Joke" Castle and a small citadel manned by his Holstein guards. This peculiar ensemble, called Petershtadt, was mostly demolished during Pavel's reign. Antonio Rinaldi, the Italian-born architect who also designed the Grand Palace at Gatchina and the Marble Palace in St. Petersburg, was commissioned by Peter III in 1758 to build a modest stone palace next to the fortress, and this has survived.

After Peter was deposed, Rinaldi was commissioned by Catherine the Great to build the Chinese Palace, in the Upper Park, as her official country residence. However, Catherine spent little time at Oranienbaum, which she had grown to hate during her marriage to Peter, and by the end of the 18th century the estate had been turned into a Naval Cadet College. The palace became an Imperial residence again in the reign of Alexander I, and retained that status until the Revolution, when it was immediately opened as a museum. Although never captured by the Germans, Oranienbaum was bombarded during the war and, while the Grand Menshikov Palace survived intact, its restoration was given much lower priority than the more famous estates at Peterhof and Tsarskoe Selo. Today, the small but elegant park has been almost completely restored, while the full restoration of the palaces has finally gained momentum over the last decade.

The lands on which Oranienbaum and the town of Lomonosov were established were first presented by tzar Peter the Great to Grand Duke Alexander Menshikov around 1710. At the time, Menshikov was overseeing the fortification of the sea fort at Kronshtadt on Kotlin Island, 5km from the site across the Gulf of Finland. 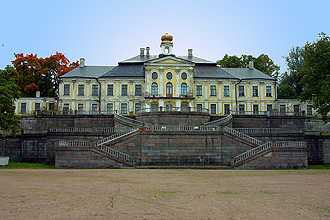 Menshikov began to build his residence here in 1713, at about the same time as Peter began work on his own estate at Peterhof. Menshikov seemed intent on outdoing his master in terms of scale and grandeur, and commissioned architects Giovanni Mario Fontana and Gottfried Schadel, who were already building the Menshikov Palace in St. Petersburg, to design his seaside palace. After over a decade of work, which eventually bankrupted Menshikov, the palace was completed.

Menshikov had little time to enjoy his new palace before he was arrested and exiled in 1727. The estate at Oranienbaum was passed to the state, and Menshikov's palace became a naval hospital. In 1743, the estate was presented by Empress Elizabeth to her nephew, the future Peter III, who commissioned Francesco Bartolomeo Rastrelli, the greatest late baroque architect working in Russia, to renovate the palace. The palace was altered again in 1762 by Antonio Rinaldi, who added a granite staircase and semi-circular balcony to the northern terraces and redecorated many of the interiors. After serving as a Naval Cadet College from the end of the 18th century, the palace was used as a residence by both tzar Alexander I and his brother Mikhail. During the 19th century, several famous architects, including Luigi Ruska, Carlo Rossi, and Vasiliy Satsov, reworked the interiors of the palace.

Today, while the Grand Menshikov Palace is still extremely impressive from the outside, its interiors are in a parlous state, and major renovation work still needs to be done to prevent parts of the building collapsing. For visitors, there is little to see except a collection of portraits of the various owners of Oranienbaum. Built between 1758 and 1762 by Antonio Rinaldi, the small Palace of Peter III is, along with the nearby Gate of Honour, all that remains of Petershtadt, the model fortress that Peter III had built for himself and his Holstein bodyguards.

Peter's Palace itself is a simple but attractive example of early neoclassicism. A compact, two-storey mansion, square with a crescent facade cut into one corner, the palace was clearly designed for Peter to live alone, as evidenced by the size of the living and sleeping quarters. While there is nothing particularly impressive for visitors to see inside, the Picture Hall has a reasonable collection of 18th century art, and the ceiling of Peter's boudoir is painted with scenes of life in Petershtadt. There is nothing particularly Chinese about this charming building in the southern corner of the park at Oranienbaum. Built by Antonio Rinaldi between 1762 and 1768, it was the first major building project to be ordered by Catherine the Great, who planned for the building to serve as her private dacha. In fact the Empress spent only 48 days there during the 34 years of her reign. However, the building, which is currently undergoing full-scale renovation, is considered one of the finest examples of rococo in Russia, with has superbly ornate interiors featuring a range of late 18th century styles, including Chinoiserie, a trend imported to St. Petersburg from England rather than from the East.

From the outside, the palace is a relatively simple building, single-storey except for the small central pavilion, painted in a mellow combination of ochre and yellow. The seventeen rooms inside, decorated by Rinaldi and other leading artists and craftsmen of the day, feature pink, blue and green scagliola, painted silks, and intricate stucco work. Rinaldi's parquet floors are wonderfully ornate, using several types of rare Russian and imported wood. Among the highlights of the Chinese Palace interiors are the Glass Beaded Salon, the walls of which are hung with 12 panels of richly coloured tapestries depicting exotic birds and fauna. The fine white glass beads that form the backdrop of the tapestries give the whole room a diaphanous, shimmering quality that was designed to be particularly effective in the glowing twighlight of the White Nights. The full influence of Chinoiserie is in evidence in the gaudy Large Chinese Salon, where the walls are covered with marquetry paneling of wood and walrus ivory depicting oriental landscapes, and large Chinese lanterns hanging in the corners. The room also contains an English-made billiard table with superb wood carving.

The interiors of the Chinese Palace are particularly prized because they have survived almost completely intact since Catherine's reign. Whereas most of the interiors of St. Petersburg's imperial palaces had to be completely reconstructed after the wanton destruction of the Nazi invaders, the decorations of the Chinese Palace were successfully evacuated, and re-installed in the early fifties. They are, however, in chronic need of restoration, and the process is finally underway in ernest, with several major Russian and international conservation agencies involved in the process. As yet, there is no date set for the completion of works.

Like the fabulous buildings at Oranienbaum, the park around them is in need of a great deal of tender, loving cate to restore it to its former glories. While some parts of the varied parkland can still give a fair impression of the carefully planned landscaping carried out in the reign of Catherine the Great, others are so overgrown as to have become just wilderness.

The Upper Park, to the south-west of the Grand Menshikov Palace, is the most beautiful section of the estate, with varied woodland interlaced with canals, bridges and ponds. Laid out in the reign of Catherine the Great by Joseph Bush, the rolling parkland contains the Chinese Palace and Antonio Rinaldi's equally fascinating Sliding Hill, a three-storey, blue-and-white baroque pavilion that was once the starting point for a 500m "rollercoaster" using sledges or wheeled carts. Other buildings in the Upper Park include the Stone Hall, used in Catherine's reign for masquerades, the late 19th century Pergola, and the simple neoclassical Cavaliers' Room, which now houses a cafe. The Upper Park also boasts a deer enclosure with tame and very friedly inmates.

The Lower Park around the Grand Menshikov Palace was laid out in the early 18th century, when formal gardens were still the fashion, and hence there is little to see for now among the unkempt flower beds and silty ponds.